The Eternal Cylinder Wiki
Register
Don't have an account?
Sign In
Advertisement
in: Creatures, Carnivorous, Savannah,
and 2 more

Aggressive
"The adult Tonglegrop (Glossosphairium polymorphum), initially mistaken for a separate species, is vastly greater in size than the juvenile form and has undergone several profound biological transformations. It is now capable of spraying a sticky, acidic substance, which also continuously drips down from its membrane, acting both as weapon and trap. Like the juvenile, it is bipedal but can also employ its membrane in locomotion, allowing it to attain tremendous speeds while navigating hazardous terrain. Additionally, its membrane now serves a reproductive function, gestating Glickbols in their pre-larval stage. Perhaps most importantly, the adult Tonglegrop is omnivorous, with a distinct preference for meat. It is, without a doubt, the apex predator of the Savanna."

The Tonglegrop is the adult variant of the Glickbol and Tonglegroplet. It is more than able to kill every creature smaller than itself in the Savannah. Tonglegrops can pick up acceleration quickly and roll around on a ball of acid which can outrun a rolling Trebhum. They are also able to spit acid out of their large mouth and will even engage floating creatures such as Onkifurt.

Tonglegrops will like to attack larger meals than Trebhum, such as the other predators of the Savannah.

The only way to kill these large beasts is to make two of them crash into each other, or get one killed by a Celestial Trehwhaala. They are too smart to be tricked into falling into toxic chasms, although they can sometimes fall in. Trebhum that have the Mixer Body mutation can kill Tonglegrops with energy bombs or cluster bombs. Once killed the Tonglegrop will drop the Tonglegrop Acid Pump. If a Trebhum eats this they gain the Toxic Trunk mutation.

There is a desert variant of the Tonglegrop that has a different skin color, but no new compendium entry or behaviors.

There is an extinct relative of the Tonglegrop called the Hypertonglegrop, which is only mentioned in the Grashtuub's compendium description. 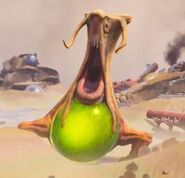